Google has recently added a Chrome Beta to the Play Store, allowing users to test more bleeding edge versions of the browser.

Taking a cue from the desktop, Google has added a beta channel of their Chrome browser onto the Google Play Store (download link below!).

To differentiate from its stable counterpart, the beta version has a big “beta” tag taped across the icon, to avoid confusion.

This is what Google says about Chrome beta for Android:

Welcome to Chrome Beta for Android!

– Preview the latest features: Try out the newest features. (Sometimes these may be a little rough around the edges.)
– Give early feedback: Let us know what you think and help make Chrome for Android a better browser.

What’s New in This Version?

The first version uploaded to the Google Play Store is at version number 25.0.1364.8, 7 numbers up from the stable version yet doesn’t show any major improvements or features, but there seems to be some under-the-hood as the browsing experience was faster and snappier, how Chrome should be.

Google hasn’t added anything to the What’s New section (as it is the first version uploaded) though I hoped that they’d list some of the most significant changes from the current stable version. Here’s what I’ve noticed though:

The Chrome sign in screen has seen some minor visual changes, and makes it clearer on what content has been synced across from the desktop browser.

I’ve perused the new software and I couldn’t find any other noticeable changes to the user interface. Maybe we’ll see a more significant update in the weeks ahead..

If you’re rocking Android 4.0 or later, you can download the Chrome for Android beta, but remember that this is beta software and could be filled with plenty o’ bugs.

Be aware that the app will ask for 3-4 permissions upon setting up sync for the first time in the the beta browser.

Will you be downloading Chrome beta for Android?

Home » Google Chrome » Chrome Gets a Beta Channel for Android 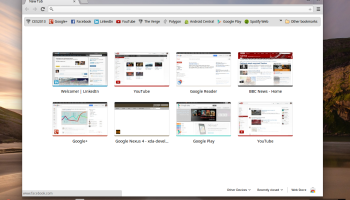