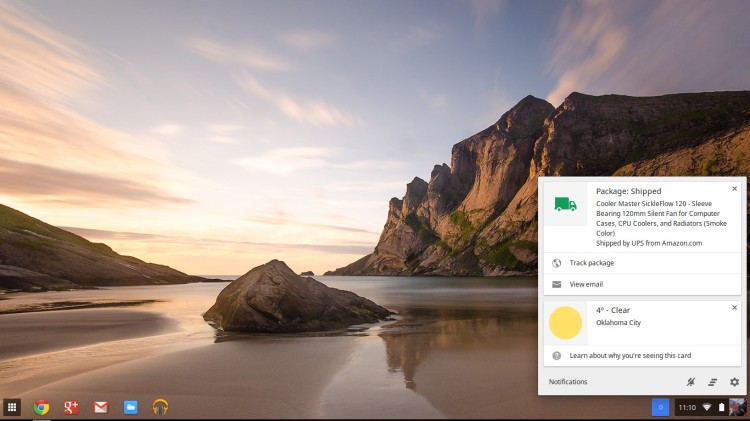 Last week’s update to Chrome Canary enabled Google Now notifications for those using Canary builds, but the recent update to the Chrome OS Dev channel brings the feature to users not quite adventurous enough to use Chrome OS’ hidden Canary channel.

Just like in the Canary version, Google Now notifications get added to Chrome OS’ Notification Centre, making full use of rich notifications to provide actions like tracking dispatched packages or viewing the latest weather for your area.

You’ll need to be on the Chrome OS Dev channel and have Google Now configured on Android or iOS with the same Google account you’re using for your Chromebook.

To enable the feature, head over to chrome://flags/#enable-google-now, change the setting from ‘Default’ to ‘Enabled’, and click ‘Relaunch Now’ at the bottom of the page.

Once relaunched, your Notification Centre will have a number of notifications from your Android or iOS device synced. Google says that Chrome will only show a subset of cards from your mobile devices for now. Google Now will also use your mobile devices for location data – though with the feature coming to your laptops and Chromebooks, this could very well change in the future.