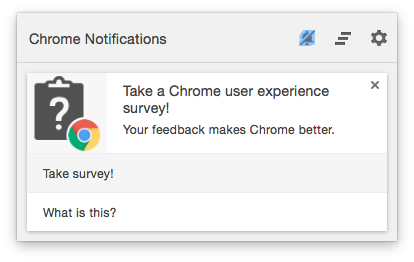 Google has launched a new Chrome extension to gather feedback from Chrome users.

It’s called ‘Chrome User Experience Surveys’ (CUES for short) and is available to install from the Chrome Web Store today.

“We’re looking for a few bold Chrome users to be part of the first group to try out a new way to give Google feedback,” reads the Store page listing.

But how does it work?

As the name implies, users installing the extension will, from time to time, based on their interaction with Chrome, see a pop-up notification asking them to take a short survey.

The survey prompts will appear at “event specific” moments, according to Google.

Precisely which ‘events’ will trigger a survey notification are not detailed by Google but are likely to cover specific features, options and settings, experimental changes to the UI, and encounters with security, connection and malware warning pages.

The key difference here is that the survey prompts appear pretty much as and when you come across the trigger.

Each survey only takes a couple of minutes to complete and a (theoretical) maximum of four survey requests will be shown to per user per week to ensure that no one is nagged to distraction.

The feedback collected through the surveys will be used to improve Google Chrome for everyone.

In an attempt to head off privacy concerns before they’re raise Google say the extension does not monitor or track browsing history. The only data sent by the add-on is when the “infrequent” events take place and the survey responses filled in to accompany them.

The feedback period as a whole will last 120 days from the date of installation after-which the extension will automatically remove itself from Chrome.

Is it worth opt-ing in? Well, that depends.

Aside from the warm glow of being helpful there is no reward or prize for installing the extension or completing a surveys within it.

But seeing Google Chrome improve based on the feedback of users is, perhaps, reward enough.

Chrome User Experience Surveys is a free extension for Google Chrome and is available to install from the Chrome Web Store.

If you want to opt-in to help Google out you can do so by hitting the link blow.