Chromebooks once again proved a force to be reckoned with during the hotly contested/promotionally congested US Back to School shopping period.

Data from industry watcher NPD Group shows Chromebooks made up 4.5 percent of all back-to-school PC sales during the 10 week shopping period. This figure is up 1.2 percent on 2013 and makes for an impressive 32 percent rise year-over-year in all.

Apple’s Mac OS also increased its overall margin by 14 percent on 2013, with MacBook sales up 17 percent for the same period. The number of PCs and notebooks running Microsoft Windows fell by almost 4 percent, but devices running the OS remain the biggest overall sellers.

According to NPD Chromebooks accounted for “more than 5 percent of notebook sales, and 18 percent of all sales of notebooks under $300.” Given that few Chromebooks sell for more than this — and none of the 17 Chrome OS laptops taking part in Amazon’s promotional offer did — this isn’t entirely surprising.

But Chromebooks weren’t the only winner at the low-end.  Windows increased its share of sub-$300 notebooks by 37 percent, a sign that its aggressive pricing to combat Chromebooks is showing some fruit — albeit at a cost to them.

NPD say Apple was the standout winner this year, managing to snatch more than a quarter of all sales. Their rise is especially surprising considering that it doesn’t compete at the ‘low-end’, where most of this year’s gains were found. This shows people are still willing to pay a premium for notebooks…so long as it has an Apple logo on it.

News back to school marketshare npd 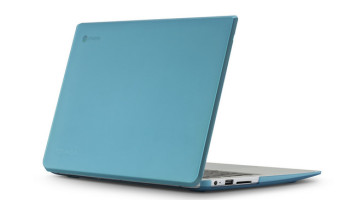 Toshiba Chromebook 2 Already Shipping from Amazon US
Read Next