Google has announced that it is extending its support period for Chrome on Windows XP until the end of the year.

As announced back in 2013, the search giant planned to provide Chrome builds for Windows XP until ‘at least’ April 2015.

With that early deadline now upon us Google has decided to extend support for Chrome on Windows XP a little longer, rather than leave an estimated 11 percent of worldwide computer users truly adrift.

The OS will continue to receive new versions of Google Chrome as they’re released for the rest of this year.

Microsoft stopped patching security holes in the perennially popular OS back in April 2014.

Google warn that PCs still running the outdated operating system are are “in danger of being infected by malware and viruses,” and add that this vulnerability makes it ‘increasingly difficult for Chrome to provide a secure browsing environment.’

But, despite urging people to upgrade to a support, secure computing environment — Linux and Chrome OS are ideal candidates,— they do acknowledge that not everyone is in a position to do so.

And so, today, April 16, Google announced it will extend the support period for Chrome, allowing the millions of XP holdouts to use a browser that’s ‘up-to-date and as safe as possible on an unsupported operating system’.

The extension will see Google Chrome for Windows XP receive updates and security patches for another eight months through to the end of the year.

Are you on Windows XP? Does this new make you happy? Let us know in the space below. 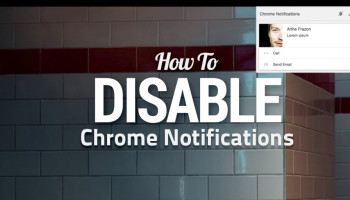 How to Disable Chrome Notifications on Mac and Windows
Read Next