Google have formally announced the release of Samsung’s new Chromebook and Chromebox devices, both of which are available to order from today.

The new computers are said by Google to be almost three times faster than the original Chromebooks released last year.

Both devices come with the latest iteration of ChromeOS, which sports a revamped interface and many new features. 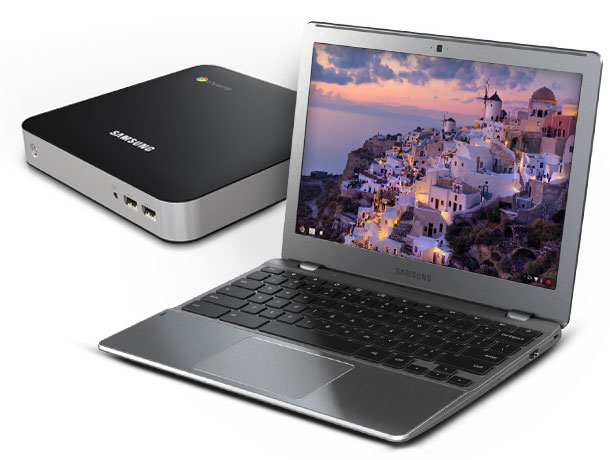 Of the devices themselves, Google’s Linus Upson says:

“[There is] support for hardware-accelerated graphics, a built-from-scratch multi-touch trackpad and an open-source firmware stack provide a much faster and more responsive computing experience.”

The Samsung Chromebox is super small and super light. It comes with: –

As great as the new hardware is it’s going to be ChromeOS that makes or breaks these devices.

The good news is that the revamped the UI, designed to resemble a traditional computer set up, makes for a marked improvement on workflow and multi-tasking.

Indeed, anyone using the ‘Aura shell’ on an older Chromebook will know that the improvements made to ChromeOS 20+ run far deeper than looks.

Attention has also been paid to ensuring that there are features within ChromeOS that don’t require you to hunt down a web app or, like many early ChromeOS users did, assumed there is no support for a specific function.

To this end there is an improved video player, enhanced image editor, and a file-manager that is logical in its layout.

They all sound trivial on their own but they all go a long way towards making ChromeOS ‘feel’ like a proper operating system replacement and not just a innovative gimmick.

Both the new Chromebook and Chromebox can be ordered today from a range of online retailers (location dependent).

Head over to the Chromebook web-page and click on the ‘buy now’ button to find a stockist near you.