Google has introduced automatic backups of photos and videos as part of an update to the Google+ Photos App for Chrome OS.

With the update, images stored inside a DCIM folder on an SD card or USB drive can be silently set to sync to Google+ in the background, allowing you to close the app and get on with more important things — like browsing this website!

‘Snap your shots, stick your SD card into your Chrome OS device and sit back as Google+ sync does its stuff’

While this hands-off approach to image backup is a new feature addition to Chrome OS it is unlikely to sound novel to those familiar with the Android and iOS apps for Google’s social networking site, where automatic camera roll uploads have been a key feature for a while.

But in bringing a similar feature to the Chrome desktop experience Google bridges expectation, not to mention simplifies and automates a process that many of us have had to do by hand.

Getting Auto-Backup Set Up

So you’ve got a Chromebook and you take a lot of snaps that you think deserve saving but don’t know how to set it up. Read on.

Any images or videos uploaded to Google+ are listed as private. Only you will be able to see them until you choose otherwise. Before we begin you will need to make sure you have the following:

Don’t have the app? No worries. Click the button below to install.

Once installed, open the app through the App Launcher and, when prompted, sign in with your Google Account. You’ll be walked through various settings and will need wait for it to perform its initial sync actions before continuing.

Next, insert or connect an external media device containing photos you wish to upload. After a short pause a prompt will appear on screen asking if you’d like to set up automatic importing of files. Click yes/ok to proceed and check the ‘Don’t ask me again’ option to enable truly automatic backups. 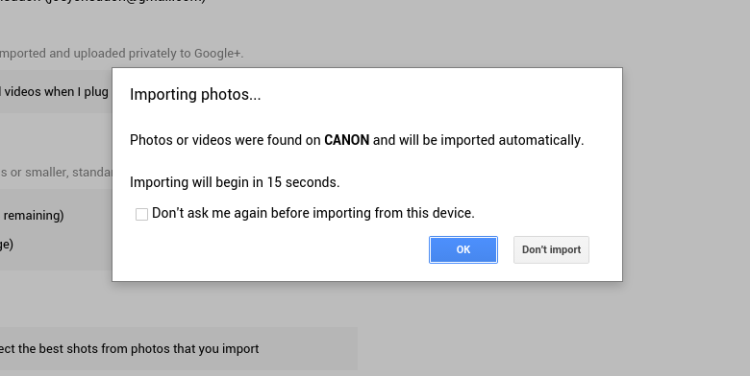 Now, every time you insert a memory card containing new photos the application will silently start to upload them to your Google+ account in the background. You’ll be kept abreast of progress via a notification, which also offers the option to pause the task.

When all is complete you’ll get another notification. Now you can open or return to the main application to view  individual photos, sets and albums and, of the ones you like, share them (e.g., make public) with a couple of clicks.

Automatic uploading is optional and can be disabled entirely by unchecking the option listed under ‘Photo Sources’ in the ‘Settings‘ section of the app itself.

Performance wise, this app is also fairly heavy. On older Chrome devices, particularly the Samsung Chromebook, it is often painfully slow to use.

From professional photographers to just a selfie addict, the ability to have an SD card full of memories and snapshots seamlessly sync to the cloud in the background of Chrome OS will undoubtedly find favour with users.

With holiday season almost upon us, and Chromebooks making the perfect portable travelling companion, it couldn’t have arrived at a better time.