Google Play have bolstered their music offering, directly competing with Spotify and Rdio, with a music streaming subscription service in addition to their music store and cloud locker. We take an in-depth look into All Access.

Back in 2011, Google launched Google Music, a service which allowed you to upload and store your music collection in the cloud. Your music could be streamed to your computer and mobile device. In 2012, Google Music was rebranded Play Music and the Play Music Store launched allowing users to buy music tracks which were then available in their Play Music library. 2013 sees Google completing their music offering with a streaming subscription service, similar to Spotify and Rdio with an essence of Pandora.

Google Play Music is the only service to boast an online music store, music cloud storage, skippable streaming radio and an unlimited music streaming subscription service all into one. This is a big deal. You no longer need to use iTunes to buy your music, Google or Amazon to store it, Pandora for streaming radio and Spotify for your unlimited streaming needs; Google can do it all.

Since the All Access update, the entire web player has been given a lick of paint. The interface is much cleaner and sleeker than before. It is now broken down into four sections. ‘Listen Now’ is the first section you will see when you log into Play Music. It is basically a section to begin listening to music instantly, it will suggest music in your library that you may have recently added or listened to.

‘My Library’ is your entire music library which you either have uploaded to Play Music or added albums and artist from the streaming music library. You can add any album or track to your library; this section is where it will be archived. Your library can be viewed by Artist, Album, All Tracks and Genre. Play Music seems to put more emphasis on adding tracks and albums to your library rather than creating tons of playlists. Though you can still create playlists, it takes more of a backseat compared to Spotify. The My Library section is more akin to an iTunes library than Spotify.

‘Radio’ is basically unlimited skippable radio stations, like Pandora. You can create radio stations based on a certain genre, artist, album, individual track or user-created radio stations which may have been shared on Google+. However, Play Music Radio does have one rather innovative feature over Pandora, Spotify Radio and recently-released iTunes Radio. You can view the radio playlist, and swipe away tracks you do not want to listen to and even more tracks up or down the playlist.

Finally, there is ‘Explore’. This section is to discover new music. The first tab, Featured, lists music and playlists recommended by Google’s music team to highlight the latest trends and new music. The Recommendations tab suggests music to try out based on your music taste and previous listening habits. The New Releases tab displays all the latest albums added to Play Music. I tend to check this section every day just to check out some new music I may have missed. The more I use Play Music, the better the suggestions get. You don’t even need to use the Explore tab to discover new music: each artist page and album track listing page shows a list of related artists. I find myself going to my favourite artist page and just look through the related artists, and next thing I know I’ve added a bunch of new albums!

The Android app works great too. It has a very similar UI to its web counterpart, which is a great UI for Android. It too has the same functionality as the web; I can stream my library of music, find new music and add to my library, listen to Radio, create playlists and so on. You can stream music to your Android device over WiFi or Mobile Data; Play Music will cache your play queue while streaming and intelligently control the quality level of music based on your data speeds. Offline functionality is available, but in my testing I have found caching tracks for offline can take a while to complete. Compared to the Spotify app, Play Music provides more functionality and looks better (though I never really had an issue with the Spotify UI). Minor improvements I did appreciate over the Spotify app: rich notification support and music that carries on playing after you receive a notification and the notification sound is activated – Spotify will just kill the music.

An update to the Play Music iOS app is coming shortly, which will grant access to All Access.

One aspect in which Play Music All Access works better than Spotify is the way it manages your music library. In Spotify, it’s all about creating playlists, which can be great fun and an easy way to manage your music. However, it becomes difficult to decide which tracks belong in each playlists, and you have to put every track in at least one playlist to become part of your library. It can be quite a time consuming task. With Play Music All Access, you just add an individual track, albums or whole artists into your library, and you’re set. Plus, you still have the option to create playlists if you want. You can even create playlists without adding those tracks into your main library if you don’t want to.

The most important part for any music service is the content, and I am pleased to say Google has succeed in providing a massive library of music which you can instantly start streaming. Compared to Spotify’s collection, I have found no missing music at all. I believe the figure is around the 15 million mark, which will put it on par with Spotify. Plus, Play Music has the advantage of the cloud locker, so if you can’t find a particular album or artist, just upload it to your library – a feature which Spotify cannot match.

When Google+ launched in 2011, Google set an initiative to enhance all their products with a strong social aspect and unifying all Google products under the Google+ banner.

From day one, Spotify understood that music is social and built its entire platform around social, allowing users to create playlists to share with their friends and publish on their Facebook, Twitter and Tumblr profiles. Spotify profiles allowed users to publish their playlists, what they’re listening to and send tracks to other Spotify users. Spotify partnered with Facebook to increase their social layer.

Google has a popular social network which it has tied into Play Music, but the implementation is poor. You can share individual songs, albums and playlists to your Google+ profile, but the button is hidden away. There should be a +1 button on every track, album and artist; but it appears the social layer is an afterthought. Furthermore, it would be great to be able to go onto a friend’s Google+ profile and see what they have been listening to and even see what they are listening to in real time (similar to Spotify user profiles), but this has been left out. You can share your created playlists on Google+ and start listening to your friends’ playlists, but you can’t collaborate on playlists.

With Google’s ability to combine their social network across their entire platform, it’s disappointing to see Play Music lacks the basics. It should be the easiest and most obvious Google product to integrate Google+ into.

With this in mind, Vic Gundotra recently spoke to The Verge quoting that they have completed about 60% of the work applying the Google+ social layer to all their products.

Not sure what to listen to? Need some background music? Want to discover new music based on your listening habits? Try Play Music’s Radio function, providing unlimited skippable radio station.

Have thousands of tracks stored in iTunes or Windows Media Player? Have a large collection of CDs? Upload them to Play Music’s Cloud Storage, backing up your entire music collection in the cloud and streaming it to all your devices.

Spotify, Rdio, Amazon, iTunes and Pandora instantly replaced by one service to rule them all!

For the past six years, I have been a loyal Spotify premium subscriber. I have built my entire music library in Spotify, and listened to my music through my computer and mobile device using the service. While I still regard Spotify as a superb music service, Play Music has many added benefits. Apart from the deep integration with Google and my Android devices, the ability to combine my All Access streaming library with my uploaded music library is very compelling.

For instance, British rap act Example isn’t available on any streaming service, so when I was using Spotify I never added their music to my library; now with Play Music I am able to upload and add Example to my music library along with my All Access library – they are treated as equal citizens. There are plenty of bands, like Example, which choose not to make their music available to streaming services, with Play Music you can build the ultimate library with your music and the massive library of Play Music All Access.

My one month free trial is almost up, and I will be renewing it for the foreseeable future. Both Spotify and Rdio are fantastic services, but Google has really upped the music streaming business. Its web and Android app are beautiful and slick. Music lovers have a wide variety of options to listen to music – they aren’t limited to streaming and unlimited Radio. If you’re missing your Beatles or ACDC back catalog, you can upload it to your music library. Play Music does severely lack in the social area, some would criticise that Google has failed to support Facebook and Twitter, but I am happy to forgive them for that since they are trying to promote their own social network.

Many will stick with Spotify and Rdio, because they have built very large music libraries and playlists which they won’t want to recreate. Those who are interested to move to Play Music, give it a go, you will not be disappointed. 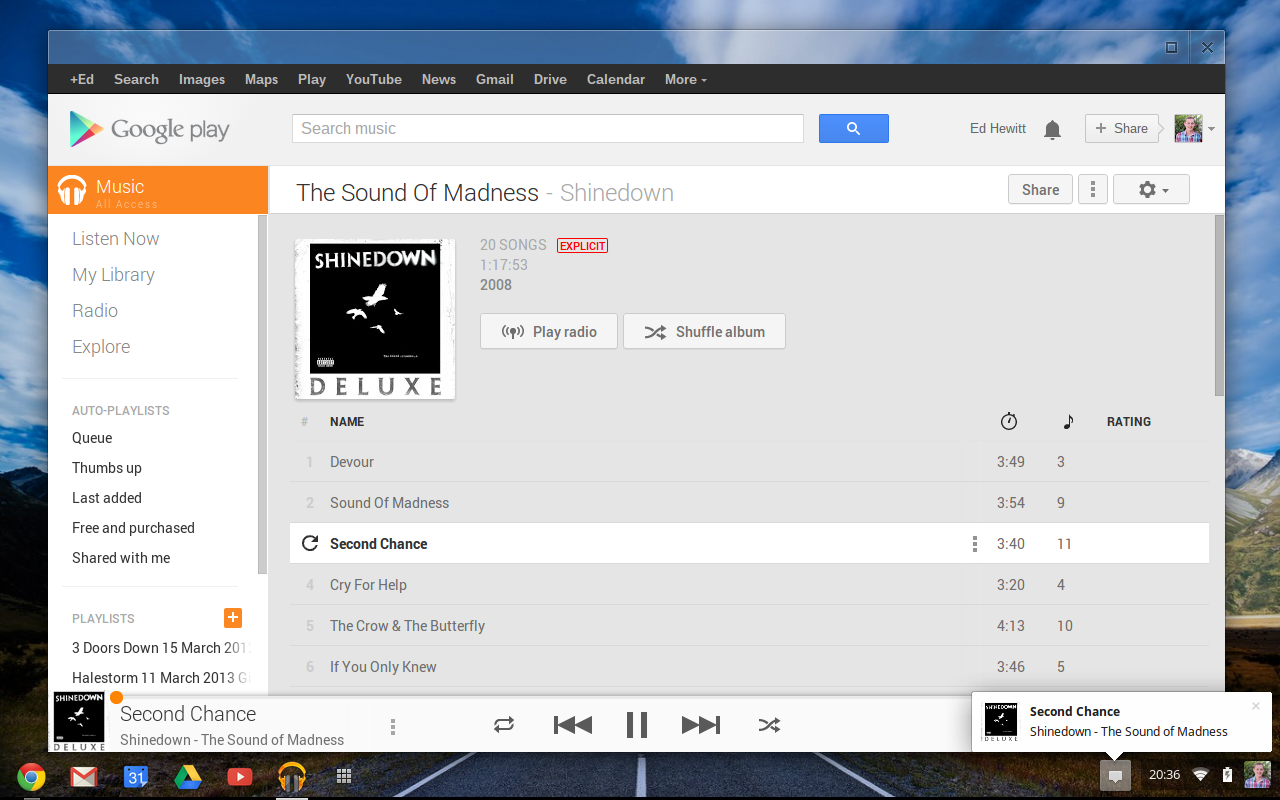