Google has updated its homepage with a new ‘app launcher’ and redesigned logo.

In the first major overhaul since the introduction of a ‘black nav bar’ back in June 2011, Google has changed the way many of its core services are accessed from search pages.

As the most visited webpage in the world the Google landing pages have to remain user-friendly and fresh – something these changes are designed to address.

The famous ‘Google’ logo has been freshened up by ditching the pseudo-3D bevelling around letter shapes and dropping the gradients they were filled with.

The new, flatter design is far easier on the eyes, scales well at smaller sizes and – perhaps most tellingly – fits in with the 2D style many Google service icons are now drawn in.

Also introduced alongside the rejigged logo is a new ‘app launcher’. This replaces the ‘black nav bar’ that ran across the top of a Google web page with links to other services.

The app launcher is located in the upper-right of a Google webpage. Its icon will be familiar to anyone who has ever used a Chromebook or a (stock) Android device – another sign of Google pursuing cross-platform consistency. 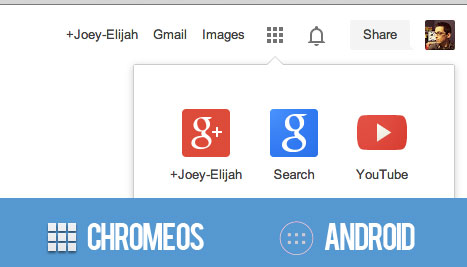 The launcher itself does the same job as the now-deprecated black nav bar; it houses quick links to sites like Google News, Maps,  Gmail, etc.

Bringing It To Chrome – With Extras

The updated design is also coming to Google Chrome. Providing that you have the Instant Extended API turned on (if you don’t know what that is, or haven’t turned it off then it will be ‘on’) then you’ll see the new look will greet you every time you open a new tab.

But that’s not where things stop for Chrome. The feature also enables new Omnibox behaviour (searching from the new tab page refocuses the search in the omnibox).

You’ll also find a new ‘Apps’ entry sat in the far-left of the bookmarks bar. It’s from here that you can access your apps from a new tab page.