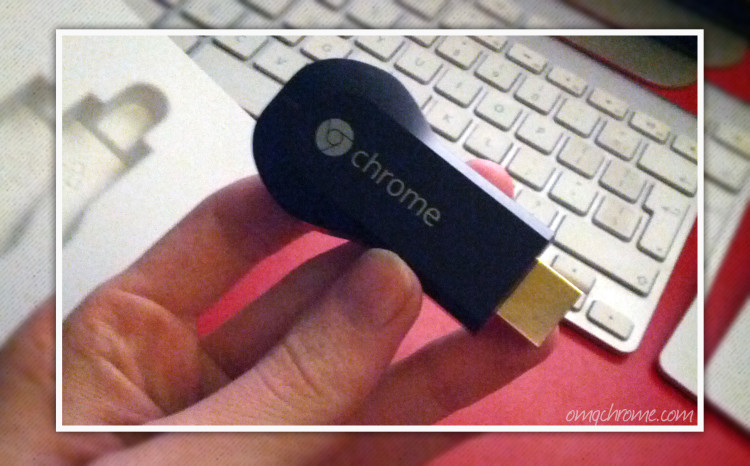 What is a Google Chromecast? What does it do? And do I really need one? These were all valid questions I heard myself ask when the device launched in the US late last year.

Being in the UK I had no way to find the answers to those questions for myself, short of coughing up eBay merchant markups or waiting for another Amazon import window to accidentally appear.

That all changed this month as Google officially launched their diminutive media dongle over here, as well as in ten other countries. Finally able to go hands-on with the gadget so many people have been getting excited by, I thought I’d write up my experience to help anyone else pondering a purchase.

Now, the big crux for me is that I own variety of different devices, ranging from Android smartphones to iPads to Chromebooks. As such, I have a myriad of ways to watch the latest cat videos on YouTube, listen to my catalog of mid-noughties pop-punk on Google Music, browse photos, and gorge on a Netflix box set.

What could a £30 Chromecast possibly offer me that I don’t already have or can’t already do? Turns out, a lot.

What is a Chromecast?

Before we delve into my personal experiences, let’s recap the basics of what the device actually is.

The Chromecast is a small HDMI dongle that’s about 3-inches in length. This makes it a bit bulkier than a standard USB thumb drive, but smaller than most other ‘smart TV’ add-ons like the Roku or Now TV box.

At one end sits a full-sized HDMI ‘male’ port (this part goes into a TV) while a small micro-USB input is at the other (this is where the USB power cable goes).

Internally it features a full ‘system on a chip’ design, with integrated high-speed WiFi, on-board hardware decoding various video formats, 512MB RAM, and 2GB of storage. The device runs a stripped down version of Chrome OS that, just like its namesake, updates silently in the background so that you’re always running the latest software with the latest features.

What Does a Chromecast Do?

The Chromecast works in companion with smartphone applications and the Google Chrome browser. It allows media, such as videos, photos and web pages, to be ‘pushed’ from a supported tablet, smartphone or browser to a TV.

So, for example, say you have a bunch of holiday snaps on your phone that you want to share with your family. Rather than all of you hunching around a tiny phone screen you can install a photo app (like Google’s free Photowall app) to ‘cast’ them over WiFi to your TV.

Nothing needs to be ‘transferred’ to the dongle first; just open an app like YouTube, hit the cast button on a video, and Chromecast will play it on your TV. Most media applications offload the processing to the Chromecast itself, freeing up your mobile to act as a remote control, or do other things.

Anyone using a compatible device or application that is on the same network as the Chromecast can ‘send’ content to it. The list of compatible devices runs large; any Android phone or tablets running 2.3 or above; iPod, iPad or iPhone running iOS 6.0 or higher; and any laptop or PC running the Chrome browser with the ‘Google Cast’ extension installed.

Applications that already support ‘casting’ to the dongle include Netflix, HBO GO, Pandora and the BBC iPlayer. The number is continually growing, and there are a bunch of innovative indie apps also available – including a game of TicTacToe!

What makes the dongle tempting for most? To butcher a well-known phrase, ‘It’s the price, stupid!‘. At a price point of £30 the Chromecast really falls into true impulse buy territory. It’s the latest technology at a dirt-cheap price — who can resist that? It took less than 5 minutes after going on sale in the UK for me to cave in and buy it!

By not breaking the bank most people’s expectations on how ‘useful’ it has to be or how often it should be used to justify the spend are lessened accordingly. Smart. 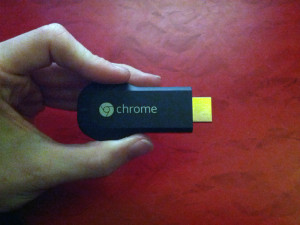 My device arrived at the weekend courtesy of Amazon. Within minutes removing the small package from the obligatory oversized Amazon box it came in, I was up and running.

Seriously. I spent more time sifting through the handful of extras it ships with than I did setting it up. It is that simple.

A minor point, but one that links into the impulse buy: the packaging of the Chromecast feels premium. It’s a thick stock of cardboard and the design is light and clear. Anyone seeing it on a store shelf will probably duck down and double check the price tag, assuming there’d been an error made.

For a tiny box there’s a good few things crammed inside:

Instructions on getting the device running are so basic that they’re written on the inside flap of the inner box.

First, you plug the Chromecast into your TV and hook up the power cord, either through a USB port on the TV or using the USB adapter supplied.

Next, you just head to the Chromecast setup website (or use the free Android or iOS app) and follow the on-screen prompts. This asks for your network password, and lets you name your Chromecast.

Mine is called OMG! Chromecast!, naturally. ;)

And that is pretty much it. Grab your nearest Android tablet, iPhone or laptop and you’re ready to cast content with a quick click or tap.

The first application I tried out was the YouTube app (simply because it was already installed on my Samsung Nexus). I loaded up a video, hit the cast button and within seconds the video was playing back on my TV.

The Chromecast took over the stream to process it on the dongle itself. This freed up my phone to act as a remote control, with options to adjust volume, queue other videos, etc., or switch to another app without killing or interrupting what was playing.

It’s this one-click simplicity that really makes the device feel like a standout. It’s everything that the smart TV should’ve been: smart. We all have phones and tablets and laptops; they’re easier to find content on than by installing ‘apps’ on a TV, then navigating awkward UIs to enter search text, etc.

I would be highly surprised if the technology wasn’t built into TVs going forward.

The Chromecast is a simple concept: it takes everyday devices like TVs and smartphones and makes them work together seamlessly.

But arguably the most exciting features are the ones not yet offered; the possibilities and opportunities of wire-free second-screen sharing are only just starting to be imagined. 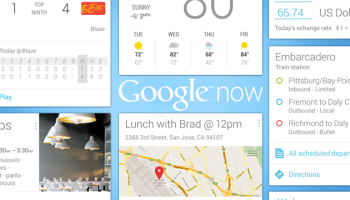