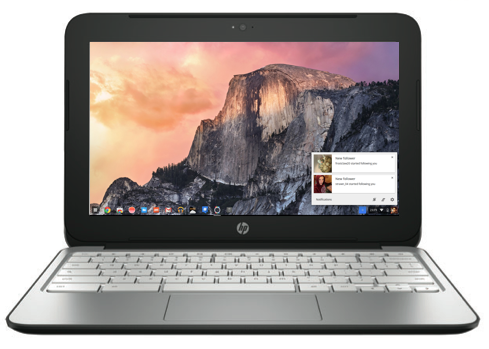 A new fourth-generation HP Chromebook 11 will offer buyers the choice of an IPS screen.

Documents spotted on the company’s official website by German technology site Winfuture.de reveal full details of the refreshed model, including reference to a 4G variant.

It will be the fourth revamp in HP’s 11.6-inch Chromebook line, having first debuted in late 2013 as a ‘By Google’ design.

The official ‘Quick Specs’ document for the HP Chromebook 11 G4 reveal a few changes, none of which seem all that tempting when viewed against newer devices like the convertible Acer Chromebook C738T.

The Intel Celeron N2830 processor introduced in the G3 revision is bumped to an N2340, while memory options stay familiar at 2GB/16GB and 4GB/32GB respectively. All standard fare.

Things get a bit more interesting in the screen department.

HP was the first to offer an IPS Chromebook back in 2013, making the re-addition of this option all the more pleasing.

Keeping the trends of the third iteration, the new model also boasts no significant design changes (that we know of). This is can be gleaned by looking at the weight of each successive iteration:

Rounding out the changes are references to a 4G LTE variant which HP will make available through select channels.

Expect to pay from $219 when the device goes on sale sometime in the USA over the next month.

Thanks to Roland at winfuture.de