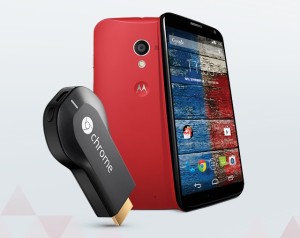 Motorola are offering the Google Chromecast for free with purchase of a Moto X on their website.

The deal comes after the Google-owned company added the content streaming device to its online store. You can grab the $35 Chromecast for free with your purchase of a 16GB or 32GB Moto X for $399 or $449 respectively with the promo code STREAM from now until the 14th.

It’s unclear why exactly the devices are being sold together, but if you’ve been in the market for a new phone and have been putting off getting a Chromecast, it’s a perfect combination. The Moto X has been well received by various publications, garnering an 8.0 out of 10 from The Verge.

And, of course, the Chromecast had a bit of a rocky start with limited app support but a tremendous comeback a few months later as a number of large content providers – including HBO, Hulu, and Pandora – added support for Google’s living room streaming device. The Chromecast was also #1 on Time Magazine’s list of Top 10 Gadgets of 2013.

Get the Moto X and Chromecast Deal