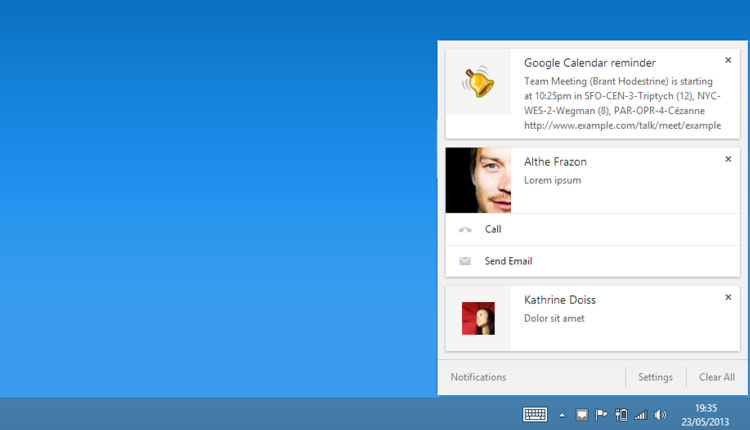 Google has added a new Message Centre to the latest beta channel build of Chrome for Windows.

The feature allows applications and web-services to deliver richer and more engaging alerts to the desktop.

As well as being able to show formatted text and images in notifications, they can also show ‘actions’ like ‘Call’ or ‘Reply to Email’ so that users can interact with alerts straight away, without needing to manually open an application or website.

Now, Google know that we aren’t always at our desks, or paying attention to stuff that pops up on screen. So, when a message is delivered but neither dismissed nor acted upon, it is stored inside the Message Center (kept in the System Tray). An unread count relaying how many notifications you have waiting is shown on the tray item for the feature.

Notifications remain “unread” until you open the Message Center.

But the best part about its introduction – aside from the beautiful design and useful functions – is the power to pick and choose what apps and sites can show desktop alerts.

Don’t want GMail toasts? Fed up of Facebook pop-ups? Open the Message Center from the system tray, click ‘Settings’, then pick and choose what alerts you’re okay with seeing:

For now this new feature is only enabled by default for those using the beta (and Dev or Canary) builds of Chrome. It is likely to arrive in regular Chrome in around two weeks.

Can’t wait? You can download the Chrome beta from the link below. But do be aware that installing Chrome Beta will replace any stable version installed.

So it’s arrived for Windows users, but what about those on OS X? Relax, as we told you last week, the feature is current in active development for Mac and getting better by the day.

Curiously, the feature is yet to show up in Linux builds, so Tux-fans will need to be patient.