But while that device may have won the plaudits it’s just one of several Chromebooks being showcased in Google’s latest video spot promoting the Chromebook family.

And ‘family of Chromebooks’ is an apt expression.

In the one minute clip, titled “For Everyone, Everywhere”, fast cuts stitch together a patchwork of Chromebook models and their roles in everyday life to create a vibrant and positive montage that feels more like a lifestyle pitch than a product promo.

Also on show are the ASUS C300 and C201 notebooks; the Toshiba Chromebook 2; HP Chromebook 14. The promo also gives us our first glimpse at the new Chromebooks from Indonesia’s Nexian and India’s XOLO.

It’s a lively, colourful and wholly ‘Google’ spot that shows viewers just how seamlessly Chromebooks can slot in to everyday situations, be it learning in the classroom, cooking in the kitchen or surfing the web from the couch.

The music used in the video is “Handsome” by the British indie-rock band The Vaccines. 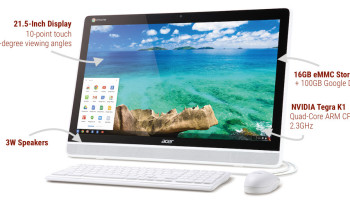