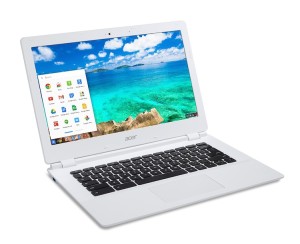 Samsung and Toshiba might be scaling back on their European release plans, but Acer, now the world’s biggest Chromebook seller, doesn’t appear to be following suit.

A recent update to the company’s UK website added a product page for the Nvidia Tegra-powered ‘Acer Chromebook’, suggesting that a UK release date may be imminent.

No surprises there. A UK and European release was always expected. But what is surprising is that the UK store listing mentions that it is a touchscreen Chromebook available in both 11.6-inch and 13.3-inch models:

Here’s the same product listing page from Acer’s US website. Notice that it makes no reference to a touchscreen:

Could a touchscreen variant be a UK or European exclusive? Might it launch there first, and come to the US after? That we don’t know. We do that it’s already abatable to back-order from Amazon UK¹, however.

Acer unveiled the non-touch versions of its latest Chromebook in the US back in August where it’s priced from $279. Touch functionality was briefly highlighted in a video promo for the device, but has otherwise not been mentioned.

The Acer Chromebook uses an Nvidia Tegra K1 processor in a slim, fanless design. It comes in two screen sizes, the latter in a choice of HD or Full-HD display. The standard HD model features an as yet unbeaten 13-hour battery life.

Acer is no stranger to touch-equipped Chromebooks. The Acer C720p, launched last year, was the first consumer Chrome OS device to feature one. This has since been followed by the Lenovo Thinkpad Yoga 11e — which folds flat into a tablet — and the Lenovo N20p — whose screen can rotate 180 degrees to form a ‘stand’ mode.

Toshiba is expected to bring a touch-enabled version of its second-generation 13-inch Chromebook to market in the coming months.

Is it a good buy?

For all its promise — we dubbed it the Chromebook that changes everything — the Acer Chromebook 13 has met with relatively poor reviews, most centred around its mediocre screen quality and sub-Celeron performance.

Despite the negativity there is still plenty to recommend. The long battery life, great keyboard and high resolution display are all fantastic for the price point. While adding a touchscreen won’t pep up to the middling performance, it might add differentiation.

And with touch gestures set to come more to the fore in Chrome OS over the coming months, it wouldn’t be a bad idea to invest in a model ahead of time, either.