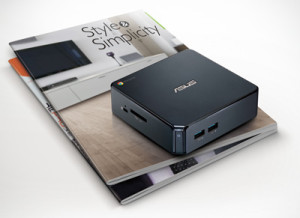 A more powerful version of the successful ASUS Chromebox has seemingly gone on sale.

The ASUS Chromebox M075U uses the same processor as the new i3 Chromebook from Acer to deliver faster performance, better graphics and improved power efficiency.

Both it and an even more powerful Intel Core i7 model were announced by ASUS in March at the launch of the Celeron-based Chromebox, which became an instant best seller on Amazon US. At the rather sweet $180 price point it would’ve been strange had it not.

Whether the i3 model can match its sales remains to be seen. As we’re fond of saying around here, increased performance tends to come with an equally engorged  price tag. The ASUS Chromebook M075U has a retail price of $399 — more than double that of the entry model.

CPU bump aside the device uses the same fanless chassis as its cheaper siblings and features 4GB RAM (upgradeable to 16GB), 16GB of flash-based storage and 4x USB 3.0 ports. HDMI, DisplayPort, Wi-Fi and Bluetooth are also included by default.

As a bonus, ASUS are reportedly bundling a free wireless keyboard and mouse with purchases of this model.

Where to Buy the ASUS i3 Chromebox

The big question is where can you buy one, and when. The answer to that depends on where you look.  Several well-known American online electronics retailers, including B&H Photo Video, have the device listed as ‘out of stock’ or available to pre-order.

Some third-party sellers on eBay are claiming to have stock in hand, while the sole result on Amazon US is is from  EXCaliberPC who are selling the device for $427 (!) plus free shipping.

Buy ASUS i3 Chromebox on Amazon US

We’ll update this article with more links as and when we come across them.