In the first five months of 2014 Chromebooks accounted for nearly 35 percent of all commercial channel notebook sales (an estimated 1.4 million).

For the three weeks ending June 7 things were even better, with NPD noting a rise to 40 percent of all commercial channel sales.

“Chrome’s unit strength ahead of this year’s education buying season shows how it has become a legitimate third platform alongside Windows and Mac OS X and iOS,”

It’s not just cash-strapped students eyeing up google’s low-cost Chromebooks. Business and educational institutions are turning to the devices, seeing them as an affordable and competent alternative to traditional Windows laptops not only in unit price but in cost of maintenance and deployment as well.

Encouraging as these latest stats are it is important to stress their limitations. NPD’s US B2B data only tracks a given number of businesses, resellers and distributors. What’s more, B2B figures only count units sold by one business directly to another business.

Such tracks might count a crate load of laptops sold by ASUS’ US distributor to a third-party wholesaler, or said wholesaler selling direct to a retail group buyer, etc.  They do not include sales made to individual consumers at retail.

Businesses, schools, governments and any other organisation that might buy Chrome devices in bulk — that’s what B2B sales tend to track.

An increase in device sales as a whole only paints part of the picture. An OEM breakdown for the same three-month period is also offered by NPD — and it makes for interesting reading.

In just one year, Samsung’s share of B2B sales in the US has tumbled by 40%. It drops from a commanding 88% in 2013 to a slimmer majority of 48% this year. The fall is likely down to faster, cheaper devices coming onto the market from the likes of Acer, Toshiba and Dell. 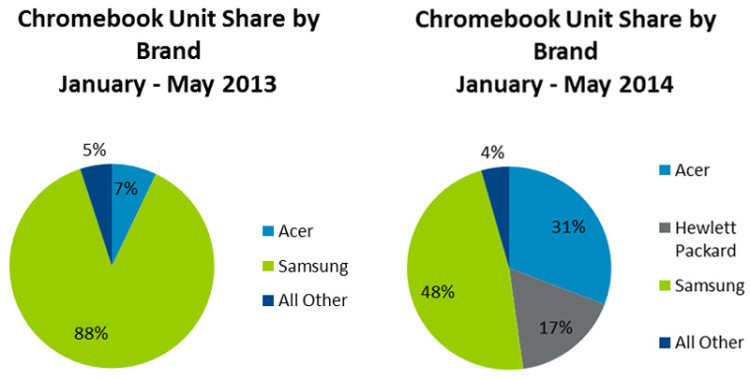 At the global consumer end the picture takes on a different tone, as we reported on previously. Here, Acer leapfrogs Samsung to be the most popular Chromebook brand (of the last three months). Dell, Lenovo and other OEMs command a healthier sounding 26% share of the market.

But can the good times last? Microsoft is partnering with several OEMs to launch cheap Windows 8 notebooks. These will go on sale towards the end of the year priced from as little as $200.