More than five million Chromebooks are on course to be sold this year, industry analyst outfit Gartner, Inc has said.

Data crunched by the information technology research company is predicting a healthy year-end total of 5.2 million Chrome OS devices sold — a 79% increase on the number of units that were shifted during 2013.

And by 2017 things will be even more bountiful, with forecast sales to top 14.4 million units.

The buoyancy of Chromebooks comes as computer makers try to offset the continuing fall in sales of traditional PCs by investing in alternatives, such as Chromebooks.

Around half of this year’s projected figures will be made up by consumer sales, and education and enterprise sales accounting for the rest.  Demand from the education sector in the U.S. is so strong that Google sold more than 1 million Chromebooks between April and June of this year alone.

But while the growth is there, Gartner’s principal analyst Isabelle Durand claims that Chromebooks “will remain a niche market during the next five years.”

In all, as many as 20 new Chromebook models are expected to be on sale by the end of the year. But which manufacturer stands to benefit from a boost in sales?

Based on current trends, Acer. The Taiwanese company this week unveiled its latest offering: a $279 Nvidia Tegra K1 based Chromebook with impressive 13 hour battery life.

It will be interesting to see how — if — Samsung, whose latest device was met by middling reviews and patchy distribution, respond. 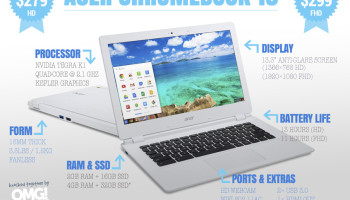