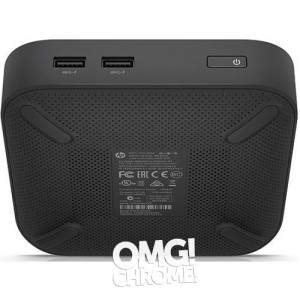 Detailed specifications and retail pricing for the HP Chromebox have been revealed in a product specification sheet.

The HP Chromebox, announced earlier this year, will hit US retail this June. A UK release will follow a few months later.

The tiny units weigh in at 1.39lbs, which is roughly the same weight as the ASUS Chromebox it’s competing against. Size-wise it is also a match for its erstwhile sibling, measuring a minute 5″ x 4.9″ rotund and a mere 1.5″ tall.

Pricing will start around the $200 mark. Again, this puts it bang on point against the ASUS offering. HP are producing the unit in a choice of four (ridiculously named) colours:

The HP Chromebox will be made available in two distinct flavours. The $200 entry model is powered by a 1.4GHz Intel Celeron 2955U and 2GB DDR3L RAM. This will serve those looking for something that is capable yet also hugely affordable.

A vastly more powerful unit is based around an Intel Core i7-4600 clocked at 2.1GHz. This version is aimed at those with deep needs and even deeper pockets as the recommended retail price will be $629 (4GB RAM) and $649 (8GB RAM).

On the subject of RAM, both devices do seemingly allow user upgrades, though the Celeron box features a single SO-DIMM slot and the i7 model has two.

These differences aside everything else is standard. There’s the ubiquitous 16GB SSD for storage, ethernet port and card reader.  Built in Bluetooth and Wi-Fi take care of connectivity, while four USB 3.0 ports are on hand for connecting all your devices.

Each box can power dual displays with a full-sized HDMI port and DisplayPort out.

HP is also selling a new ‘Integrated work centre’ (a ‘stand’ to you and I) that lets a 24″ monitor and Chromebox be securely bridged together.

Further details on availability are expected in the coming weeks.