The forthcoming Samsung Chromebook refresh features an eight-core processor – but will it be as impressive in action as it sounds on paper?

Surpassing the performance of the first generation Samsung Chromebook won’t be difficult. Never a speed demon to start with, and now more than a year old, the dual-core Exynos powering it has been left in the dust by newer offerings from Intel’s Haswell line.

Paired with 2GB RAM and a quad-core Mali-T604 GPU, it continues to deliver an acceptable level of performance, though some websites, in particular Gmail and Google+, are less than fantastic in use.

Samsung is upping the ante with their 2nd-gen ARM-powered Chrome OS notebook in virtually all areas.

Taking centre stage in the refresh is the company’s Exynos 5 Octa 5420 ‘system-on-a-chip’. This packs 8 CPU cores into a single 28nm design, and is paired with 3GB of RAM and a 6-core graphics die.

But there is a caveat: despite being billed as an eight-core processor the Exynos Octa is actually a pair of quad-core CPUs on one chip.

Four cores are based on an ARM A15 architecture handled performance-intensive activities, with less demanding tasks handled by four cores based on the slower but battery-friendly ARM A7. A combination of the eight cores can be used at once thanks to a multi-processing feature called ‘big.LITTLE’.

On paper at least, the four 1.8Ghz A15 cores should deliver a considerable performance bump, but until an Octa Chromebook appears in the wild we won’t be able to gauge precisely how big of a bump it’ll be.

Chrome OS has never had many issues chugging away 2GB of RAM, but the jump to 3GB RAM certainly won’t hurt. Modest gains resulting from a marginally faster memory clock speed should see even the most stressful of multitasking habits handled with ease.

With the number of 3D-rich games for Chrome, hardware-accelerated web apps, and media-heavy webpages on the increase, the graphics prowess of a Chromebook is just as important as everything else.

The 6-core Mali-T628 GPU claims a 50% improvement over the T604 used in the previous model, with a further 50% performance improvement coming from the addition of an extra 2 cores.

Twice the graphics performance of the first-gen Samsung Chromebook sounds like a win-win.

Heck, it may even be enough to get Google+ to load free of lag!

Home » Hardware » What Sort of Performance Will the New Samsung Chromebook Deliver? 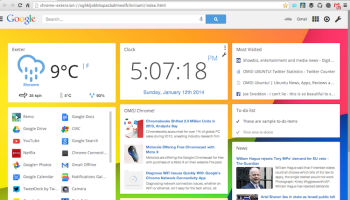