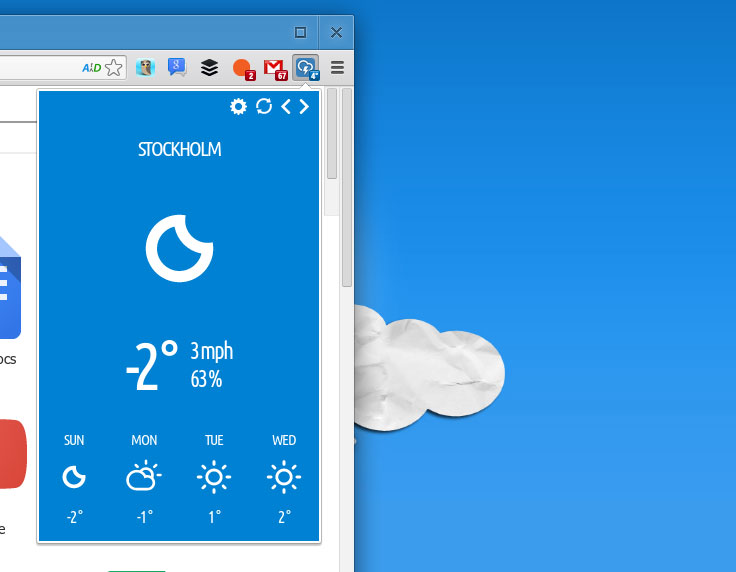 Do I need an umbrella tomorrow? Sun-screen? A snow sled?!

To answer those questions you could look out the window, guess, or open up weather.com in your browser.

Alternatively you could install one of the many weather forecast extensions available for Google Chrome, and keep up to speed on the weather forecasts for your area and beyond.

The newest of these meteorological marvels is Stormcloud. Released a few days ago, it’s both beautiful and informative, And we’re going to take a look at it right now…

So what does Stormcloud do?

First and foremost (since it’s the bit on show at all times) Stormcloud’s toolbar item will show the current (or average, should you wish) temperature.

For more detailed weather stats, including a four-day forecast, one only needs click on the toolbar item to open a vertical pop-up pane.

No more being shunted to a new tab, or having to enter post/zip codes – just click, see, close.

And simple really is a perfect way to describe this extension. Simple and well executed. It shows you what you need to see – the weather – and little else.

At its core the app provides:

But simple doesn’t have to mean bland, as Stormcloud proves by making strong use of colour.

The background colour can be configured to suit your tastes or, rather neatly, can automatically base itself on the temperature/weather of the location being displaying. Cold climes? Expect to see some chilly blue hues. More balmy weather? It will warm up with orange and red colours. 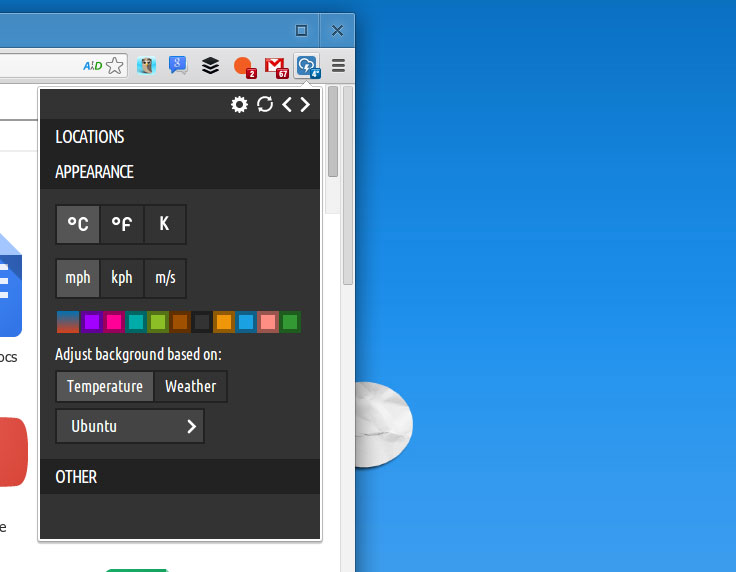 The app has proved a big success on the popular Linux distribution Ubuntu, where it has been the biggest selling app in the Ubuntu Software Center for several months running.

That’s no mean feat. A quick scan of existing items on the Chrome Web Store shows just how droll weather apps can be.

Although Stormcloud for Chrome is free to install, you can unlock additional features by purchasing a ‘Pro’ code for $1.99.

Cheaper than a cup of coffee in many places, going Pro supports the developer as well as giving you some additional customisation options to play with.

Stormcloud for Chrome is a free download, and works where Chrome does (excluding mobile). 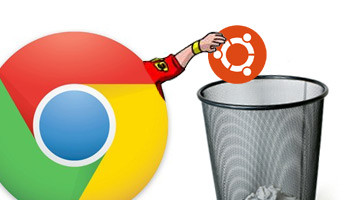