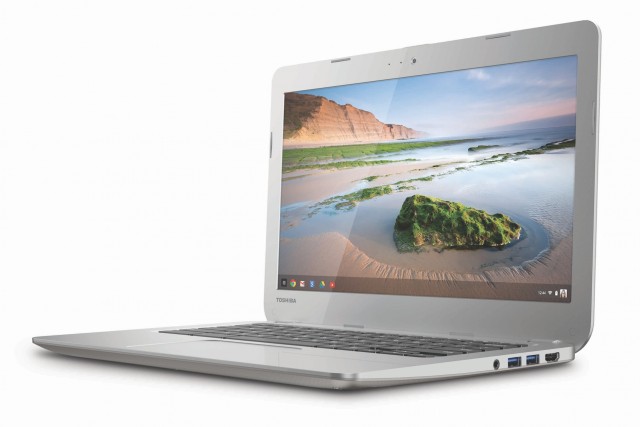 After a bit of a premature start last month, Toshiba has officially unveiled their first Chromebook.

Toshiba’s new Chromebook includes a 13.3-inch screen at a common 1366×768 resolution. Like other Chromebooks, the Toshiba device is powered by a Haswell Intel Celeron 2955U processor clocking in at 1.4GHz.

The Chromebook weighs 3.3 pounds and Toshiba are expecting up to 9 hours of battery life out of their first Chromebook. The larger screen size will appeal to some, but the run-of-the-mill 2GB of RAM and 16GB SSD make Toshiba’s first effort a rather middling affair – replete with grey plastic masquerading as aluminium. On the other hand, Samsung may have much bigger plans for their ARM Chromebook on the horizon.

The Toshiba Chromebook will retail for $279 in the US and will be available starting February 16. That puts the device at the same price point as HP’s somewhat troublesome Chromebook 11 and $20 cheaper than one of our favourites of 2013, the HP Chromebook 14.