Google’s Chrome OS has come a long, long way in just a few short years — but is it as good as it can be?

The introduction of the Aura desktop two years back brought with it a renewed interest in the platform. By switching to a more traditional looking desktop layout Chrome OS found itself in a more appealing position to those previously put off the ‘browser-centric’ computing experience it offered.

Now sporting dedicated apps for music playback, file management, webcam snaps, hangouts, note taking and more, with each release the OS becomes more of a drop-in replacement for traditional OSes. The ‘average’ user whose needs are met by online services, with offline features, are dutifully served by Chromebooks.

But it’s not perfect. Here’s a list of five things that, off the top of my head, I ‘miss’ in the Chromebook experience. 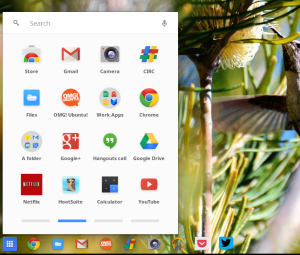 t on my real desktop or the one on my iMac, I like to keep my desktop free of files, icons and clutter.  That said, I do use the desktop as a sort of ‘temporary’ space while I’m working.

On Chrome OS the desktop is…well, it’s pretty much just a photo frame with an App Shelf. While you can change the background, you can’t actively put anything ‘on it’.

Adding in support for this would, as a quick glance at most Windows desktops would show, probably get messy. But it would make Windows converts feel a little more at home.

Limit it to just files, maybe an optional trash can for nostalgia’s sake, and a lot of folks will be happy.

Bit of an odd one this but with the variety and capability of Chrome Apps becoming ever more sophisticated, the sorts of features on offer are growing.  And with more features comes added UI cruft.

A set of ‘Chrome App’ UI guidelines for app developers might sound like a limitation on creativity but they needn’t be excessive or compulsory. Just offer some light documentation on where best to place menus and lists of items (e.g., in a hamburger menu) and the Chrome OS experience will benefit from a bit of consistency.

Google has since enabled this feature. See this article for all the details on how to use it.

As devices primarily made for the cloud it make sense that users can set up, use and get the most from online service. Well, unless that service happens to be Google Play Music.

At present it’s not possible to upload music to the service, which lets you store around 20,000 audio tracks for anywhere access, through a Chromebook. You can play, but you can’t add.

Hope is not lost; browser upload code was found in the HTML of the Google Music website suggesting that the feature is, finally, on the way.

As a Mac user I like being able to right-click on the dock icon of an open application to access extra options, like a list of recently opened files, or options for opening a new window.

Chrome offers this for the ‘browser’ app, but nothing else. It would be great if developers could hook into and integrate more with the desktop to provide similar functionality.

Would you like to browse local network shares through the File Manager of Chrome OS? How about Dropbox or Microsoft OneDrive?

Murmuring on the Chromium Issue Tracker suggests something like this will arrive in due time.

I think it would be beneficial. Yes, it has the risk of cannibalising the buy-in of Google Drive but with the killer combo of lower prices than its rivals and the 100GB free offer, I don’t think they need worry too much.

These are just five issues off the top of my head. What ‘features’ do you consider to be missing from Chrome OS?