The HP Chromebook 14 and Acer’s C720 Chromebook have made appearances in both companies’ official websites for Canada.

The Acer C720 is currently listed alongside the older C710. The C720 was first released in October, featuring a Haswell-powered Intel Celeron processor with 2 or 4GB of RAM (depending on the model) and a 16 GB SSD.

In another odd development with the C720 line, Acer are pushing yet another model of the device to Canadians dubbed the C720-2832. The specs are similar to the other two C720 models available elsewhere, but with a larger 32GB solid-state drive.

Unfortunately, the C720 isn’t available in Acer’s online store. Other online stores for Canada have yet to list the device either and reader Chris Carvalho says that staff at both Future Shop and Best Buy brick-and-mortar shops aren’t aware of any new Chromebook stock.

There is no sign of the touchscreen-toting C720P either, though a blurb on the product page mentions a touchscreen and the appearance of the non-touchscreen version bodes well for its future arrival.

Learn more about the Acer C720

The HP Chromebook 14, on the other hand, is available for purchase from HP’s online store for Canada.

Released back in October, the Chromebook 14 features a Haswell-powered Intel Celeron processor with 2 GB of RAM and 16 GB SSD storage. Though the device comes in white, aqua and coral, only the white model is currently available from HP Canada.

As expected, there is no sign of the smaller Chromebook 11 in HP Canada’s store. With the recent charger issues and still no official followup from HP or Google, it may be weeks or possibly months before the “flagship” Chromebook reappears in storefronts across the globe and, hopefully, for the first time in Canada.

Buy the Chromebook 14 from HP Canada

Though the Chromebook 14 is the only new device currently available for purchase, the appearance of both new Chromebooks in Canada is a good sign that Google’s neighbours to the north aren’t getting ignored.

And if you’re still looking for a Chrome or Google-themed gift for a special Canadian (even yourself!), check out our gift guide. 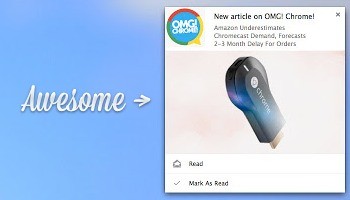