It’s Chrome’s fifth (yes, fifth!) birthday today and to mark the occasion Google has announced something special: ‘a new breed of Chrome App’.

Now, before you get too excited, I should point out this ‘new breed of Chrome App’ isn’t all that new at all – at least, not to any one who’s been following Chrome or this site. ‘Chrome App’ is the user-facing term for ‘Packaged App’.

Packaged Apps are a far cry from the traditional ‘web app’ They’re not stuck in a tab or exist as nothing more than ‘glorified bookmark’ to a website. Packaged Apps work more like ‘native’ desktop apps. They don’t require Chrome to be open to run, work fine offline, and are able to interact and access computer hardware like webcams, USB sticks and more.

Chrome Apps have been available to install from the Chrome Web Store for several months. But, from today, Google are giving them a visible push to more users through a new Web Store initiative called ‘For Your Desktop’.

This groups together some of the more well-known Chrome Apps like Wunderlist, Pocket and Google Keep.

If you’re using Chrome for Windows (any channel) you’ll see the ‘For Your Desktop’ section highlighted in the store the next time you visit.

For those on Mac you’ll need to be using the Dev channel to see it today. Stable channel users will be able to take advantage of it in around 6 weeks or so.

Check our our Packaged App tag to see some of our favourite Chrome Apps. 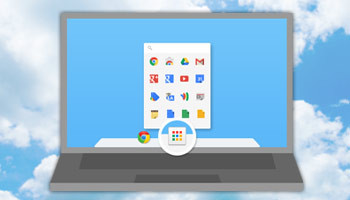